As an Office 365 admin you might get a request while out of the office or otherwise not in front of a computer. Continuing on the example from the education sector, a teacher might be home sick and the substitute teacher needs access to the class team.

There are several ways to add an owner to a team as an Office 365 admin, like the Office 365 Admin center, the Azure AD Portal or as usual PowerShell.

While on the go some of these options are just as viable with an appropriate device, you also have the option of using the native Office 365 Admin app or the Azure Cloud Shell.

The easy way out would be to download the Office 365 Admin app.

Log on, choose Groups in the left side menu and search for the relevant group. Click the group in the list and choose Edit owners in the right column menu. 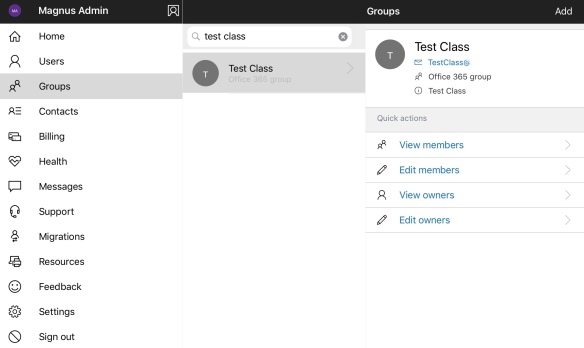 On iOS the box on the right will surface and when you click Add owners you will be able to search for a user to add.

As before mentioned you can accomplish the same using PowerShell in Azure Cloud Shell.

First up you need to download the Microsoft Azure app. Login with an appropriate admin account and launch the Cloud Shell.

The first time you use the Cloud Shell you need to let it provision a storage account. Choose a suitable Azure subscription and wait a few seconds until it is ready. You will see under resources that there has been provisioned both a resource group in your region and a storage account.

Unfortunately it seems you cannot use the Azure subscription provisioned with Office 365 for access to Azure AD, you will instead need to setup a regular subscription.

The Cloud Shell will launch Bash by default, make sure you change it to PowerShell in the upleft corner.

The Shell should connect to your tenant automatically and you will end up with a prompt like this:

While you could use the Azure AD PowerShell cmdlets, I prefer doing this the Microsoft Teams way.

When you add a user as a member or owner to a team using Microsoft Teams, it’s available to the user instantly. When you add a user to the associated group in the Office 365 Admin portal, Azure AD Portal or with the Azure AD cmdlets, it can take hours until the changes are synced. While this unfortunately is the case also using the new Microsoft Teams PowerShell module version 0.9.1 [… The Teams application may need to be open for up to an hour before changes are reflected…], I believe this will change in a future version, so we might as well get used to doing this the Microsoft Teams way.

The Microsoft Teams PowerShell module is not installed by default in the Cloud Shell.

To install it we can simply run:

Check that the cmdlets are loaded with:

After we log on to the Microsoft Teams service we should be all set to add our teacher to the class team. For that we need credentials which we will save to a variable.

To add a user to a team we need the users UserPrincipalName, which most commonly is their email address. We also need the GroupId of the team, which is where these beta cmdlets show their weakness. As of version 0.9.1 the Get-Team cmdlet is user centric.

“Gets all the teams the user is part of. The user must be you – you can only get information on yourself.” MS Docs

To be honest this doesn’t make much sense to me, and you should expect it to change in a later update.

Lacking a way to get the appropriate GroupId we must turn to the AzureAD cmdlets after all. Let’s first connect to the service and then store the class team’s group object in a variable.

We are now ready to add the substitute teacher to the class team, and promote her to Owner (teacher):

OK, I admit it’s neither the fastest nor the easiest way to add members to a team, but it opens up for scripting and automation which can reduce errors and ensure compliance. And it’s PowerShell, in the cloud, on a mobile device. Pretty cool right?